Dedicated to our customers and our community

We understand that our Brazoria County corner of the world is different, special, BETTER.

With lightning-fast broadband, the best in television programming, and all your favorite phone features, you’ll do everything better with Btel! We’ve got the priced-right bundles that will make your wallet smile, and our local, responsive, caring customer service philosophy, "Neighbors Helping Neighbors", will make everything the way it should be: easy, fun and just BETTER.

Enhance the lives of our customers through outstanding service and communications technology.

We are Here to Serve You

Btel is an independent communications company proudly serving Brazoria, Texas. Btel provides residents and businesses broadband, cable, and voice services to the community we love since 1946. Btel’s passion for providing the highest levels of local customer service paired with its commitment to dependable, quality technology has allowed Btel to grow to serve more than 7,000 customers in the greater Brazoria area. Btel takes its responsibility of being a good neighbor seriously and actively supports academic scholarships and youth programs in the community.

A History of Pioneering Technology

Located within the “Cradle of Texas”, the company was purchased by Charles “Mr. Charley” Hendrix and his wife Beulah “Boo” in 1946. Boo began her career in the telephone industry as an operator in Atlanta, Texas when she was 17 years old. Boo served in many capacities throughout her years with Btel, including as the chairman of the board until her passing in 2003 at the age of 96.

By the time of his death in 1981, “Mr. Charley” had been in the industry for a total of 61 years. For 32 of those years, he served as a director of the Texas Telephone Association. Mr. Charley was inducted into the Texas Independent Pioneer Association Hall of Fame in 1985. The company remains in the family today.

John H. Greenberg, grandson of Charles and Beulah, served as president from 1983-2013. He worked to continue the legacy of his grandparents. During his tenure, John led the company through the conversion from analog to digital telephone service, through major outside plant upgrades including utilizing fiber optic technologies, through the many regulatory changes and then into the Internet age.

John passed day-to-day leadership of Btel to his son, Charlie Greenberg, who became president in August 2013. John remained active with the company serving as chairman, until his passing in June of 2019.

As Btel continually improves and expands its services now and in the future, rest assured that the customer and the service and assistance that we provide for them are now and always will be our primary focus.

Giving Back to the Community We Love and Serve

The Btel Scholarship is awarded to students planning to continue their education at the college or university level.

Applicants must have an outstanding high school scholastic record. They must enroll at a college or university with a minimum of 12 credit hours and maintain a grade point average of 2.75 (on a 4-point scale). Applicants must be residents of Brazoria County, Texas. 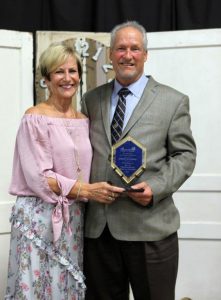 On September 20, 2018, Btel's own Johnny Greenberg was awarded the FIRST ever Humanitarian Award from the Brazoria Chamber of... 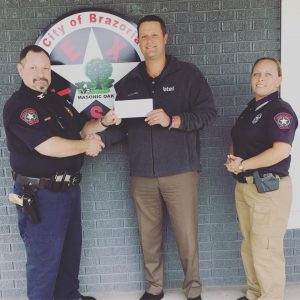 Shop with a cop

Btel was proud to donate $500 to the first annual Shop With a Cop program hosted by the Brazoria Police... 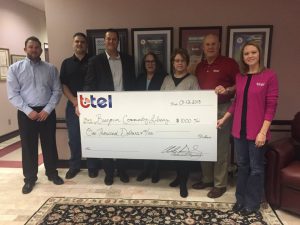 Btel was happy to be able to present the Brazoria Community Library with a $1,000 contribution.

"I always appreciate the communication and quality of service I receive from Btel. After every interaction with them I feel as though they value means a customer."
"The service technicians were very polite and courteous. It was a rainy day and the techs were very courteous to remove their boots prior to coming into the house."
"Btel employees were quick to show up and young men were very polite and prompt. Thank you so much for your new service with Fiber. Our family appreciates your efforts in providing us with new technology!"
"I have never ever even once been disappointed by the quality of care Btel has given me. I am always surprised by the quality and time frame in receiving the care given to us. I came from an area where we only had companies such as Comast, Att, Dish etc and they don’t even compare to Btel. Thank you so much."
"Excellent customer service. Came right out after business hours."
"Btel is a great company who supports the community and truly gives back."
"Customer service is always courteous and quick to respond to issues. The installation was worked around my schedule even when I missed the original window."
"I wouldn’t change anything about my recent experience. The installation team was fast, knowledgeable, and very friendly."
"Overall the installation and testing was very professional. They answered all my questions and made sure that I did not have any other issues. Thanks for the professionalism."
"Great family company!!!"